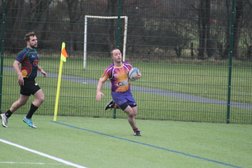 Marr Rugby’s much anticipated full schedule of rugby action started to go awry on Friday as Selkirk 2 were forced to concede the fixture as they couldn’t raise a team. Whilst this netted the 2s a bonus point win it was still disappointing as many wanted to get match play and practice after several weeks of disruption. The disappointment continued when an early pitch inspection of Fullarton on Saturday concluded that heavy overnight rain meant several areas of the main pitch were unplayable and unsafe. With little prospect of significant improvement before kick-off the early decision was to postpone and avoid Melrose facing unnecessary travel. It’s likely the 1s match will now be rescheduled to 3 February – check Marr Rugby website for further details.

This left centre stage to the 3s playing Hillhead Jordanhill on the school pitches. With Hillhead Jordanhill emerging as winners in the reverse tie earlier in the season Marr’s squad were eager to balance the books. And so they did – and with interest as they hit in eight tries to a single try response. Facing a strong Hillhead Jordanhill side the other cancellation allowed a small number of 2s players to be added to the 3s squad in an attempt to get much needed game time. Jack Scott (sponsored by the Harbour Barr) played for one half at stand-off and was in great form – scoring a try along the way and with some pinpoint accurate kicking that put the visitors under real pressure. Daniel Clark and Mark Allison were both in feisty mood and helped Marr’s pack to dominate. Covering the scrum half berth Andrew Watson was able to make good use of the space and platform his pack provided to launch repeated attacks on the visitors line.

All in all it was a good runout for the Marr players involved with strong open attacking play complemented by a vigorous defensive display against a useful and determined Hillhead Jordanhill side.